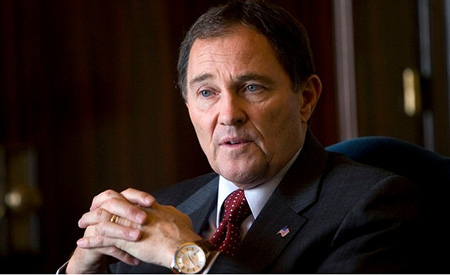 Herbert was in Washington, D.C. on a whirlwind trip Monday to participate in the signing of a bill to roll back some public lands regulations instituted by President Obama’s administration before he left office.

Herbert says he had a chance to discuss public lands issues with Zinke briefly, but they did not specifically bring up the issue of rolling back the Bears Ears Monument.

“I invited Secretary Zinke to come to Utah to look at public lands and Bears Ears,” said Herbert on a conference call with reporters. “He agrees with me that there need to be additional protections for those areas.”

Herbert said that he and Zinke are in agreement that public lands should remain that way. He also reiterated that there is no truth to the rumors that Utah wants to privatize public lands to sell them off to the highest bidder.

“I know there’s kind of the myth out there that Utah wants to privatize the lands,” he said. “That’s not true. Others say we want to drill for oil and gas. Well, there’s no oil or gas there, so that’s not true either.”

The Utah Legislature rushed through a resolution during the 2017 session asking President Trump to undo the National Monument designation that President Obama bestowed on the Bears Ears area just before he left office. The expectation was that Secretary Zinke would visit Utah shortly after he was confirmed and move forward on repealing the Monument. That didn’t happen as quickly as initially thought.

“(Secretary Zinke) has not seen the area, he’s just heard about it,” says Herbert. “He thinks some protections need to be afforded. He wants to take a look at the options when he visits. He’ll come with an open mind.”

There’s no timeframe for Zinke’s visit to Utah, but Herbert is hoping it will be sooner rather than later.

“I want them to come out, take a look and see what the options are. Then we can have a discussion with all of the parties, then decide the best thing to get done. The biggest part of my hope for today is that (Secretary) Zinke can come out as soon as possible.