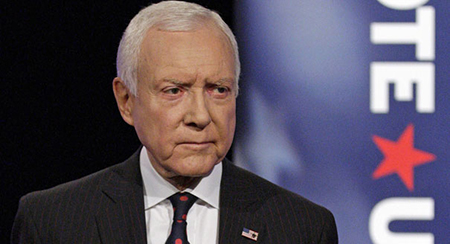 Sen. Orrin Hatch sure looks like he’s gearing up for a run at an 8th term in 2018. Our “Political Insiders” think he’ll be hitting the campaign trail soon.

Last week Hatch told KUTV he would likely run for another term unless his health or his wife’s health declines. In that case, he would reconsider that decision.

Additionally, financial disclosure statements showed Hatch raised a whopping $1.3 million during the first quarter of 2017, giving him $3.5 million in campaign cash if he decides to run again.

Our “Political Insiders” think the odds of Hatch launching a campaign for another term are very high.

Hatch has previously suggested he would step aside if “an outstanding person,” specifically Mitt Romney, would run for his seat. Romney did approach Senate Majority Leader Mitch McConnell about running.

I wonder if Sen Hatch or his wife have a health issue. Hatch started campaigning last time over a year before this date, and he has just started now. I think Hatch knows now he is NOT going to run and is trying to control the Republican candidate that replaces him by keeping viable opponents out of the race.

Utah has one of the most powerful legislators in its history, and it should take advantage of that fact.

I didn’t believe his “I won’t run again” pledge in 2012, so why believe it now? We’re about to find out just how effective a huge warchest can be, because every poll shows that a large majority of Utahns think he’s been there long enough. Will a blockbuster campaign with record spending change that??? Looks like we’re gonna find out.

It’s pretty clear he is preparing to run. However, it will be an uphill battle for him to get reelected. Most Republicans I speak with are ready for a change. People haven’t forgotten his promise last election that he wouldn’t run again.

Unless Utahns are terrified of Republicans by the end of this year, he may be the best choice. And that’s really terrifying!

I know he wants to but at the end of the day I think he will realize it’s time to call it a day. Hard to do so though when you’re personally asked by the President to run again.

But, I hope he doesn’t. He told me last time that he would not run again. That was why I supported him last time and not his opponent.

Some people believe they are indispensable. No one really is.

It is sad but true that almost all politicians are always running for something or from something. It is too bad that Sen. Hatch has tried put so much pressure on Mitt Romney to be his”heir apparent”. Mitt may run. If he does so-be-it. He will win. If Mitt does not run, Sen. Hatch will have a reason (excuse) to run again. Whether you agree with Sen. Hatch’s tactics, we must admit that he is the consummate politician.

He is in too powerful a position to give it up.

He’s not going to run again, but he’s playing games with it in an effort to anoint his successor. Bad form.

It’s a mistake for Hatch to run again. The best move would be to retire and go out at the top of his game.

He is running. I wish he’d keep he word and call it a career. I like Senator Hatch but no person is indespensbole in a democracy (or even a Compound Republic). Follow President Washington’s lead and let another have a chance to serve.

Perhaps he is keeping his big toe in the water in case someone wants to run that he doesn’t want to run.

The only reason whe is bringing reelection possibilities so early is to keep other potential candidates in limbo and pass the baton to his preferred successor, Mitt Romney.

Does the sun rise in the East? Is the sky blue? Hatch will run. His ego won’t let him quit at this point.

He’s 100% running unless his health prevents him from doing so. I think he is vulnerable in the rare way that money cannot fix. It will be difficult to convince Utah voters that he needs more time to get something done, and to make them forget that he said he wouldn’t run again last time. Fool me once…

Thank goodness! Senator Hatch is great for Utah. He is a highly productive and effective senator. And he allows Utah to punch well above its weight class.

He has a lot of power and has used it well to take care of and protect Utah. Don’t see a reason for him not to run. His seniority is a plus!

I think it is likely that he will run, but he shouldn’t. While he has done good things for Utah and his seniority is important; he is losing credibility with the voters and putting himself about the state, nation, and party. It is time for him to retire with dignity and clear the path for some one, like Derek Miller, that will make the state proud.