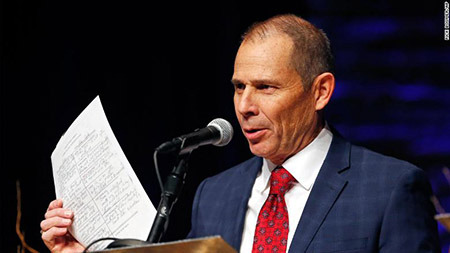 Jim Bennett, the 3rd Congressional District candidate for the newly-formed United Utah Party, will miss the Utah Debate Commission’s October debate by a 0.43 percentage point, according to the Debate Commission.

That’s what you call a close elimination.

A new UtahPolicy.com poll conducted in partnership with the Utah Debate Commission in the 3rd Congressional District’s special election – to be held Nov.  7 — shows the following:

Those two will be the only invitees to the commission’s Oct. 18 debate in the KBYU Channel 11 TV studios at Brigham Young University. The debate will be broadcast by various media from 6 p.m. to 7 p.m.

Under commission rules, in an “official” commission poll, any candidate who polls 10 percentage points minus the survey’s margin of error will be invited, no matter what party he or she belongs to, or whether he or she is an independent or write-in candidate.

That is the level any candidate needs to be to be invited to the commission’s event.

And Bennett falls 0.43 of a percentage point short of that threshold.

Bennett, the son of the late GOP U.S. Sen. Bob Bennett, had hoped to make the debate threshold, thus giving him and his new political party the commission’s official stamp of legitimacy – and a platform to take on the Republican and Democratic parties’ candidates face-to-face.

The UUP, formed earlier this year, aims at getting voter support of those disillusioned with current Republican and Democratic party partisan politics, especially seen in the gridlock that envelopes Congress today.

The UUP has already had to get a court order to be officially listed on the Utah Election Office’s November ballot.

But a state judge overruled Cox’s decision, putting the UUP and Bennett on the ballot. (If the judge had not so ordered, Bennett would have been on the ballot as an “unaffiliated,” or independent candidate.)

While Bennett came in at 5.59 percent in the new poll of 607 registered 3rd District voters, other candidates fell even further off the pace – and so won’t be in the debate, either.

In the poll’s “other candidate” category, 1.82 percent of those polled mentioned someone else who will not be counted in the balloting because they have not properly registered with the Utah Elections Office.

17.69 percent of voters said they had not yet picked a candidate to support in the election.

But that “don’t know” category doesn’t count in the commission’s assessment protocols.

Only candidates who get more than 10 percent (minus the official poll’s margin of error) get invited to the debate.

The Utah Debate Commission is a non-partisan group of media outlets, businesspeople, and others whose election-year goal is to have at least one debate among the leading contenders in any major race of the commission’s choosing.

Other entities – TV stations, or radio stations, or newspapers, civic groups, and such, could also hold debates and decide, by themselves, who are invited to their event.

So far none of those kinds of debates have been scheduled, although KSL Radio’s Doug Wright Show usually does hold a radio debate that can also be watched via the internet.

And it is usually the political tactic of a race leader not to accept many debate invitations – since the feeling is a leader can only lose an advantage to an aggressive challenger in such forums.

Curtis, who won the Republican nomination in a three-way primary election Aug. 15, is the mayor of Provo City.

Allen is a medical doctor seeking office for the first time.

Before former-3rd District Rep. Jason Chaffetz – a darling of the GOP rightwing – stepped down in June, Allen was doing a great job in fundraising against the perceived incumbent’s 2018 re-election.

But her fund raising has stalled after Chaffetz resigned his seat to become – among other things – a political commentator for Fox News.

Utah’s 3rd District is rated as the 16th most Republican in the nation by the Cook Partisan Voting Index. Rep. Jason Chaffetz won each of the last four elections in CD3 by at least 40-points.

Now the new Jones’ poll shows Curtis with a healthy lead over Allen with less than two months left in the race to fill out the remainder of Chaffetz’ term.

Allen will have to take votes away from Curtis to win, the poll shows, a tough task for a Democrat in the 3rd District.

The November winner will have to turn around and start fund raising and campaigning for the 2018 U.S. House elections.

Jones polled 607 registered 3rd District voters from Aug. 30 to Sept. 9. As stated, the poll has a statistical margin of error of plus or minus 3.98 percent.