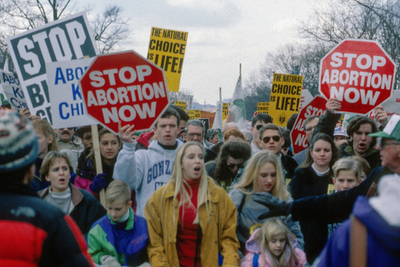 A new UtahPolicy.com public opinion survey finds that just over half of Utahns believe most abortions should be illegal.

The poll finds that 52 percent of Utahns agree that abortions should be “illegal in most cases.”

The stand closest to Roe v. Wade – the 1973 landmark abortion case of the U.S. Supreme Court – “legal in most cases,” comes in at 28 percent support.

Abortion is an issue this year in the U.S. House 4th District race between Rep. Mia Love, R-Utah, and Democrat Salt Lake County Mayor Ben McAdams – mainly because Love is trying to make it so.

Love has already accused McAdams of being in favor of “unrestricted” abortions – a characterization McAdams denies.

Both Love and McAdams are faithful members of the Mormon Church – which opposes abortion in most cases.

McAdams campaign did not respond to UtahPolicy.com for a clarifying statement on abortion.

“I support the teachings of my LDS faith that oppose abortion except in cases of rape, incest, danger to the mother’s life and in certain other rare circumstances, after seeking spiritual guidance through prayer and from trusted counsel,” McAdams is quoted as saying.

“Ultimately, decisions about terminating a pregnancy should be made by a woman in consultation with her physician, family members and faith counselors she trusts,” he adds.

If McAdams sticks with the Mormon Church’s stand on abortion, it is unclear how much Love can harm him on this issue – assuming she accepts his stand as his real position.

Utah is a Republican state, and the 4th District is considered politically as a GOP district.

So the race is basically statistically tied.

Love is trying to paint McAdams as a typical Democrat – and abortion is always a defining line in that battle.

Jones finds in his new survey:

— 57 percent of Utah Democrats stand with abortion being “legal in most cases.”

In Love’s 4th District the numbers are only slightly more moderate:

— 49 percent say abortion should be “illegal in most cases.”

— 8 percent say abortion should be “illegal in all cases.”

If McAdams took the stand of most Utah Democrats – 57 percent say abortion should be “legal in most cases” — he would clearly be out of step with nearly half of the voters of the 4th District.

A candidate may get away with that if the topic were not as emotional as abortion – say if it was supporting or opposing the Bears Ears National Monument.

But it is not that.

For example, Love started crying when she spoke at an anti-abortion rally in D.C. last year.

It appears McAdams needs to get out in front of this abortion issue now.

And religion is going to play a roll in this.

— 72 percent of “very active” Mormons say abortion should be “illegal in most cases” – as their church teaches.

— Only 15 percent say it should be “legal in most cases.”

However, then the tide turns in favor of current law – legal in most cases.

Jones polled 615 adults from May 15-25. The survey has a margin of error of plus or minus 4 percent.