The Utahn caught up in a bonkers conspiracy theory 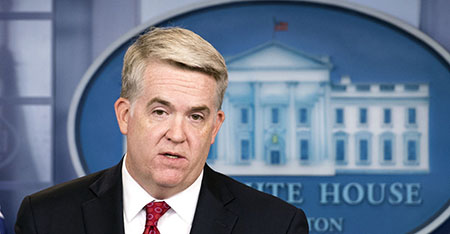 Utah US attorney John Huber is a key figure in an absolutely insane online conspiracy theory, and devotees are pinning their hopes squarely on his shoulders.

You’ve probably heard of the QAnon conspiracy theory that burst into public view over the summer when several people at a rally for President Donald Trump were spotted holding signs and wearing T-shirts saying “We are Q.”

If you’re not familiar with QAnon, here’s the short version. Special counsel Robert Mueller’s investigation into Russian interference in the 2016 election is a sham. In fact, Trump and Mueller are working together to expose a massive global satanic pedophile ring involving Hillary Clinton, Bill Clinton, Barack Obama and thousands of others. There is also the belief that the Clintons, along with Obama and billionaire George Soros are planning a coup d’eat against Trump.

In October of 2017, an anonymous user known as “Q Clearance Patriot,” later shortened to just “Q,” started posting cryptic messages on 4chan. The user was nicknamed “Q,’ which is a reference to Q-level security clearance, which is equivalent to top secret in the Department of Energy. That user became known as Q, and his followers are QAnon.

The bizarre right-wing conspiracy is also known as “The Storm” and “The Great Awakening.”

The QAnon conspiracy briefly jumped back into the public consciousness in late November when Vice President Mike Pence was photographed next to a police officer who was wearing a QAnon patch on his uniform. The police officer was later demoted.

So, how does John Huber fit into all of this?

Earlier this year, then-Attorney General Jeff Sessions assigned Huber to look into allegations of wrongdoing by the Clinton Foundation, a favorite target for conservatives. He’s also investigating whether the FBI abused their power in surveiling Carter Page, a former aide to the Trump presidential campaign.

“Q” has been posting quite a bit about Huber and his investigation into the Clinton Foundation and possible FISA abuses. 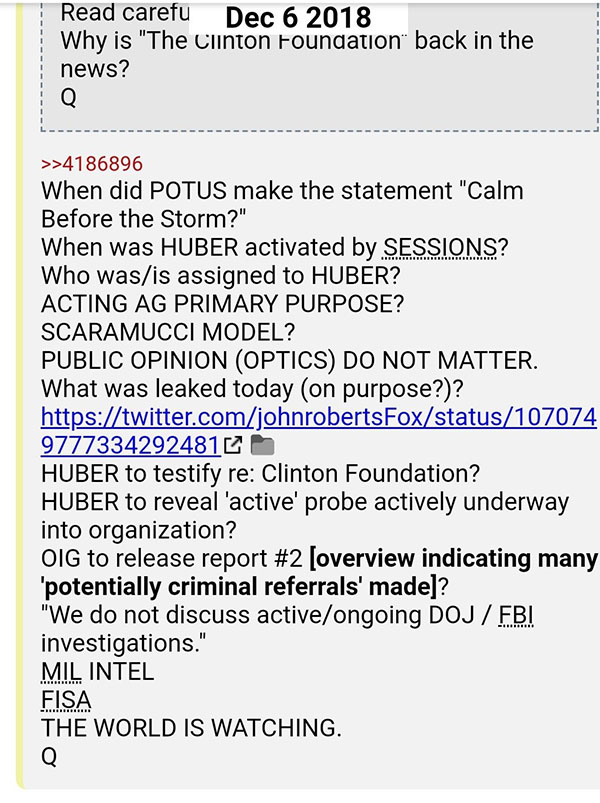 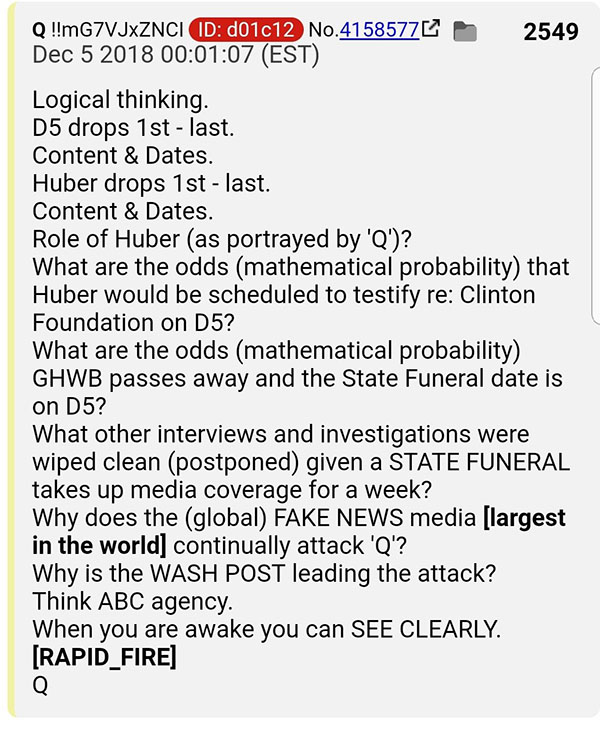 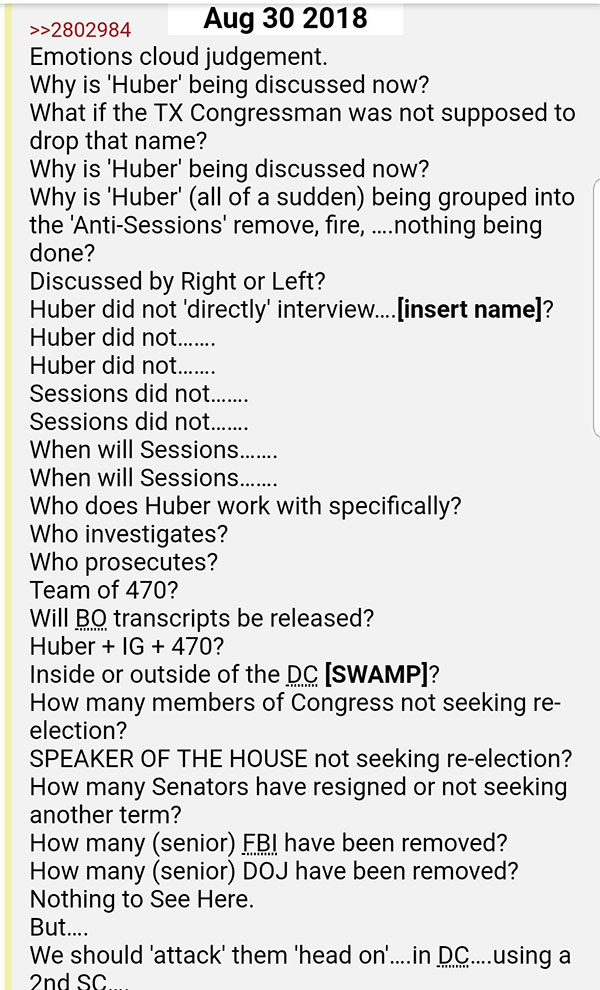 Huber was scheduled to testify about his investigation into the Clinton Foundation last week on December 5th, which Q referred to in his online posts as “D5.” That testimony was supposed to kick off a series of mass arrests of Trump’s political enemies as the whole enterprise came to fruition

That didn’t happen because of the funeral for former President George H.W. Bush. But, it wasn’t much of a setback for followers of the conspiracy theory, who saw the shutdown of the stock market and portions of the federal government as a prelude to Trump’s crackdown. As the Daily Beast’s Will Sommer, who covers the more fringe elements of the right wing in America, documented, believers saw hints from “Q” everywhere surrounding the funeral.

QAnon people, who consider George HW Bush a “criminal president,” are convinced that he’s lying in state in a giant Q as a warning to the deep state. pic.twitter.com/89JtBMXjZn

So far, the big QAnon news is that one of the buses at the Bush service said “D5” on it. QAnon believers are convinced everyone on the bus will be arrested in Trump’s purge. pic.twitter.com/Gl9vBEMMCL

According to Jake Rockatansky, a QAnon researcher and co-host of the “Q Anon Anonymous” podcast, Huber is seen as a sort of messiah for the QAnon followers.

“He’s investigating the Clinton Foundation and, so, of course, they believe that his testimony will expose such things as human trafficking and the ‘Uranium One’ scandal,” said Rockatansky.

“It goes along with their belief that ‘once the public is made aware’ there will be an avalanche of indictments and arrests, which will lead to military tribunals for those involved,” he said. “The problem is, just enough has lined up for them to hold out hope. Huber will, at some point, testify about his investigation into the Clinton Foundation. If that doesn’t provide the outcome they’re hoping for, I have no idea the mental gymnastics Q diehards will have to do.”

Q has made several dramatic predictions that have failed to come true so far. For example:

As has happened in the past, some elements of this conspiracy have crept into the mainstream media, mostly via right-wing friendly outlets like Fox News, Brietbart and others. Specifically, Huber and his investigation into the Clinton Foundation has become a more frequent talking point on Fox News programs over the past few weeks.