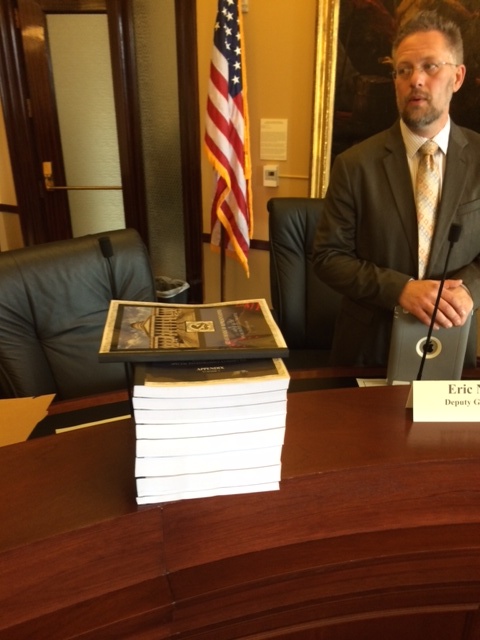 With a whimper, not a bang.

That was the final meeting of the Utah House’s record-setting investigation of former GOP Attorney General John Swallow – who resigned in December and still faces possible criminal charges in at least one criminal probe.

The actual 200-plus-page report, approved Tuesday afternoon by the nine-member bipartisan committee chaired by Rep. Jim Dunnigan, R-Taylorsville, won’t be made public until around 11 a.m. Wednesday.

That is when Dunnigan will formally present the report to the 75-member House, which last July adopted a resolution giving the committee the charge of investigating any number of allegations against Swallow – the first statewide elected official driven from office in Utah history.

The House investigation cost “around $4 million,” Dunnigan told reporters, whose cameramen rushed to take photos of the stack of volumes of the paper report after the committee’s short meeting adjourned.

While all Utahns will be able to read the report online at the Legislature’s website, after it is released following Wednesday’s report to the whole House.

In fact, the report won’t contain much new information, Dunnigan has said previously.

Most of the allegations against Swallow were released over the last six months as the committee did its work in open (and a number of closed) meetings.

Rather, it was a separate, but coordinated, investigation by the Lieutenant Governor’s Utah Elections Office that clearly showed Swallow could not survive.

That report, made public the end of November, showed that Swallow filed various illegal and false candidate and financial conflict of interest reports.

Just before the LG report was made public, Swallow announced his resignation – timed two weeks later so Swallow could qualify for a state pension.

The LG’s office investigative attorneys were preparing to take Swallow to civil court, where a state judge could have ruled the 2012 AG election void – driving Swallow from office.

In fact, Dunnigan has said previously, if Swallow and his private attorney had cooperated with both the LG and House’s investigation, at least $1 million of the final cost to the House could have been avoided.

— A brief introduction, outlining the special outside counsel and investigator.

— Four chapters, which mostly have been reported before:

A) Swallow’s efforts to “benefit himself and his political supporters” while he was both the chief deputy AG under former AG Mark Shurtleff (who is also still being investigated for possible criminal acts) and attorney general.

Those include claims against Swallow by Jeremy Johnson (now under federal indictment).

Swallow’s relationship with the pay-day lending community which, through Swallow campaign consultant Jason Powers, funneled around $450,000 into Swallow’s campaign as well as helped defeat former state Rep. Brad Daw, R-Orem, who was targeted for defeat by some pay-day lenders for his attempts to restrict the industry’s predatory lending practices.

And Swallow’s and Power’s alleged encouragement of a husband-and-wife supporter (the Bells) to purposely falsely file in-kind donations for a Swallow fundraiser; and the Bell’s problems with a home foreclosure that both Shurtleff and Swallow believed could end up harming Swallow’s AG campaign.

He “lost” cell phones and tablets; had various computers wiped of data; found his home computer hard drive “damaged;” and misplaced all kinds of receipts and other documents.

The home hard drive was turned over to his personal attorney, who hired an outside “expert” who reported he could retrieve nothing from it.

But when the House’s outside investigators finally got hard drive, the committee spent around $150,000 in a special forensic process that retrieved thousands of emails.

Those emails basically confirmed other electronic communications about Swallow’s misdeeds.

In fact, retrieving those emails and hyperlinking 1,300 of them to the final report is what has delayed the report for several weeks.

C) A section in the report details other possible wrongdoings by Swallow and others associated with him, but were not pursued by the House committee because of time, money and scope.

For example, the only action the House could have ultimately taken was impeachment of Swallow. Any alleged crimes against Powers or others in the Swallow campaign organization now falls inside an ongoing criminal investigation by Salt Lake County Attorney Sim Gill and Davis County Attorney Troy Rawlings.

The House’s investigation results will be turned over to those prosecutors.

D) Finally, the House report will include comments and observations by “other groups and individuals,” which may include complaints by Swallow’s personal attorney – who has steadfastly maintained Swallow’s innocence and argued that the House committee’s investigation illegally wandered into areas not within the House’s legal authority.

Also, that section contains any recommendations to change state election/campaign law to hinder – hopefully stop – such crimes from being committed again.

Dunnigan introduced two bills himself – which were committee approved – that deal with a number of mostly-technical changes to election law.

One major change, however, would be to require a candidate/spouse to detail businesses they are associated with for the previous year before the candidate filing.

The night before Swallow filed for attorney general in March of 2012, he “transferred” the control of several consulting firms into his wife’s name – in clear attempt to keep support from Utah’s payday loan industry secret.

Other legislators introduced a number of far-reaching election/campaign reform bills this session associated with what Swallow and his campaign consultants were doing.

However, most of those have been much watered down through amendments or outright killed.

For example, Swallow and Powers were seeking huge, single campaign donations – and working to keep them secret.

Utah is one of only four states that have no campaign contribution limits. And, once again, bills aimed at placing campaign donation limits on state candidates were all killed.

Members of the committee, including the Democrats, praised the investigative work by their own staffers – Fellows, Deputy General Counsel Eric Weeks; Assistant Counsel Tom Vaughn and researcher Jerry Howe.

All members said Dunnigan had donated hundreds of hours to the investigation and represented the committee’s work not only before the media but to doubting GOP House members who at various times called for the committee to stop its work and save some taxpayer money.

The Utah Legislature has never undertaken such an investigation before.

From the outset, it was difficult to put a price tag on it, although Fellows guessed it could be between $2 million and $3 million depending on how often the committee had to go to court to enforce subpoenas and other investigation challenges.

Swallow at first complained that the committee could only investigate his actions after he became AG in January of 2013 – and his alleged misdeeds happened before then.

But he still said he would cooperate.

Ultimately, he didn’t, says Fellows and Dunnigan, as electronic data kept disappearing or other obstacles were thrown up.

For example, at one point Swallow told an AG IT staffer that he needed his work laptop wiped because it had information on it from his LDS ward members – Swallow was then a bishop.

Even though Swallow resigned in early December, Dunnigan said Tuesday that he believes the $4 million was well spent, that it was critical that the House fulfill its constitutional obligations to make sure public servants obey the laws.

Only five full copies of the whole multi-thousand-page report were printed, staffers said.

All others will have to get their information from the Legislature’s homepage.

They said much of the delay in releasing the final report online comes in hundreds of hours of work hyperlinking all investigation statements with emails and other evidence that backs up the “true facts” of the nine-month John Swallow House investigation.