‘This is a good compromise.’ Lawmakers and Better Boundaries discuss changes to Prop. 4 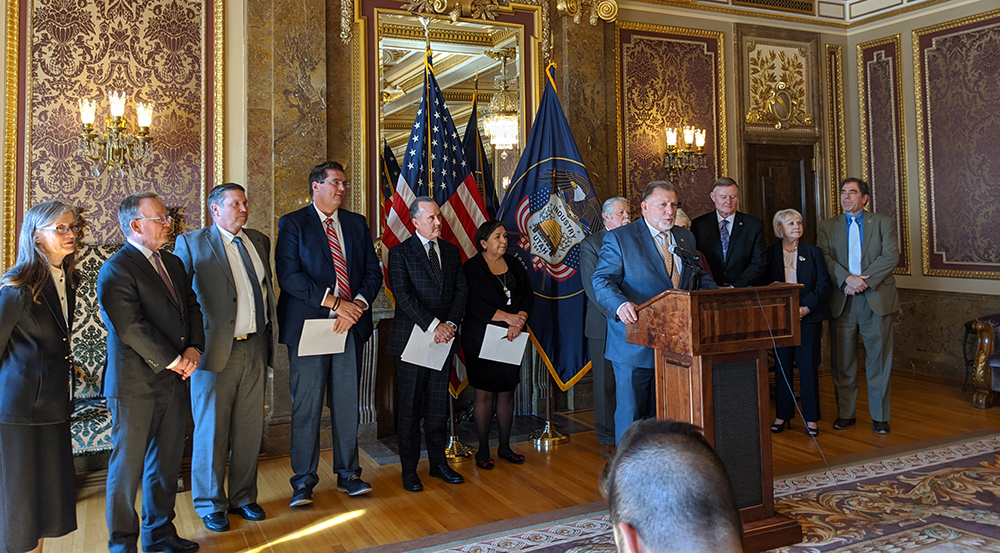 Lawmakers and Better Boundaries took the wraps off their grand bargain to make changes to the voter-approved Prop. 4 on Thursday, with both sides heaping praise on the deal to create an independent redistricting commission.

“We are at our best when we can sit down and come together,” said Sen. Curt Bramble, R-Provo, who helped broker the deal. “Nobody got everything they wanted.”

The deal, first reported by UtahPolicy.com, nearly fell apart last week over the standards the commission should follow when drawing political maps during the once-a-decade redistricting process and whether lawmakers would be bound by those guidelines.

Ultimately, the two sides agreed to include a number of provisions in the bill for the commission to follow when drawing the maps, but lawmakers are not bound by them. Considerations the commission must follow include avoiding dividing cities and towns as much as possible and preserving the cores of the original districts.

“This is a good compromise,” said Better Boundaries co-chair Jeff Wright. “We’re satisfied that this will make the process of redistricting more transparent, fair and accountable.”

After the year-long talks broke down, legislative leaders were planning to move forward with changes to the initiative, including most of what they had already negotiated with Better Boundaries. After a pause, the two sides returned to the negotiating table and hammered out the compromise that was unveiled on Thursday.

“I’d say the meetings were heated but civil,” said Rep. Carol Spackman Moss, D-Salt Lake City, who was part of the ad-hoc group that negotiated the agreement.

“What we’ve created will be much more enduring than what the original proposition called for,” said Bramble, noting the accord is much more in harmony with what the state constitution calls for.

Had Better Boundaries not come back to the bargaining table, lawmakers were considering changing the makeup of the commission that could impact the partisan division of the seven-member group. When negotiations resumed, that change was abandoned and the original selection process from the initiative was included in the bill.

This is the third voter-approved initiative that lawmakers have altered. Prop. 2, which legalized medical cannabis, underwent significant changes shortly after it was approved. Medicaid expansion, Prop. 3, was also radically changed as lawmakers sought to cover fewer people than the initiative called for. After that plan failed, the state accepted full Medicaid expansion with some work requirements and cost controls.

“I can’t overstate how much about how this bill protects the original concept of Prop. 4, and it adds Utah to a handful of states that have an independent redistricting commission,” said Rebecca Chavez-Houck, Better Boundaries Executive Director.

The bill should face little opposition in the legislature as both Republican and Democratic leaders were present for the unveiling. Governor Gary Herbert said Thursday although he had not seen the language in the bill, he anticipated signing it into law.