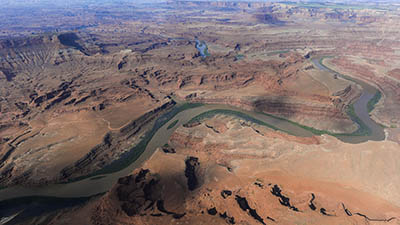 Our “Political Insiders” expect that review to have an effect on both Bears Ears and Grand Staircase-Escalante National Monument.

Most of the Republicans on our panel expect Bears Ears and Grand Staircase to be reduced in size.

Most of Democrats who responded said they think the two national monuments will be left intact, while our readers say Bears Ears and Grand Staircase will either stay the same or be reduced in size.

Utah’s Republican-controlled Legislature, Gov. Gary Herbert and the members of Congress all hope that President Trump rescinds Bears Ears. That may not be legal under the terms of the Antiquities Act. Our panel is not sure Trump will go that far.

None of the Republicans on our panel felt Grand Staircase was in danger of being rescinded. 5% of the Democrats and our readers said Grand Staircase would be reversed, despite being in existence for 20 years.

Pomp and circumstance signifying nothing. Talk to me when legislation is passed and signed.

It is so great to have a President that actually listens to what the State of Utah has to say.

But this is the Trump administration. Predicting what they’ll do is akin to predicting how much snow the Cottonwood Canyons will get three years from now.

National Monument designations should not be made until the individual states, and the federal government reach a consensus. That would eliminate a lot of the rancor on both sides of this issue. It only makes sense, provided anyone has sense instead of nonsense.

If we thought losing the Outdoor Retailers was bad, just wait until a monument is actually reduced in size. I completely understand the anti-Bears Ears argument, but we are painting ourselves into the corner of being perceived as anti-public lands. On the plus side, maybe I won’t have to wait in line for hours before being able to get into Arches or Zions.

This will immediately be tied up in courts, how that will end up is anyone’s guess. Like Trump’s two Muslim bans, this will be an overreach and Grand Staircase and Bear’s Ears will be fine no matter how Utah wants this to go. For the record, it looks like most of Utahns want them and I find this a strange hill to die on for Republicans.

The only winners in this will be the lawyers that litigate the dispute.

I know this is supposed to be a hot issue but I really just do not care. There are many more important things in my life.

There are probably good arguments to leave both in existence… just not at the over-reaching size they have.

This is an amazing event for the good people of Southern Utah; something I thought would not happen in my lifetime. To have the President recognize that Utah has been hit hard by inflaming rhetoric and attacks by left thinking “useful idiots.”

I don’t get these guys. Nationally, they are going to get creamed on this issue. If Trump does something stupid (he will), the courts will shoot it down, and hopefully, the Utah delegation will largely be removed from their duties in the mid-terms.

It is my hope that Bears Ears and Grand Staircase are both protected, and neither monument is rescinded or reduced in size.

All the citizens of the United States own “Federal” land, not just the handful of people who live nearby. The courts will eventually make that clear even to Utah’s willfully ignorant legislators!

I would prefer they both be rescinded but would take a reduction in size and live with it.

And the antiquities act will be gutted or repealed. When you review the history, it’s clear that EVERY SINGLE national park was opposed by local business and ag interests, and today’s politicians are just like yesterday’s, who were on the wrong side of history.

In the end, environmentalists and those who wish to keep our public lands public will win in a lawsuit.

Once a monument, it should stay as a monument. Otherwise, what is stopping some slimy politicians from rolling back others? Thinking some of those national monuments back East, where land values could be huge if only they could make some of that land not part of a monument. This should not be about Utah, but setting a national precedent. Btw, I am for saving these national monuments in Utah, having visited and camped in both areas in the past.

This will be contested in numerous courts for at least ten years.

It’s unclear if Trump even has the legal authority to change national monument designations of his predecessors under the Antiquities Act. Attempts to make changes to these monuments will most certainly lead to costly litigation that could take years to sort out.

I think the Trump administration is walking on thin ice with this one. How they think they can reverse monument designations made through the Antiquities Act demonstrates yet another willful misreading and lack of understanding regarding government processes and actions.

Too difficult to actually do any of the other options. Reductions and eliminations will result in lawsuits. This is whining and griping by Hatch into a welcoming ear, payback for favors, etc.