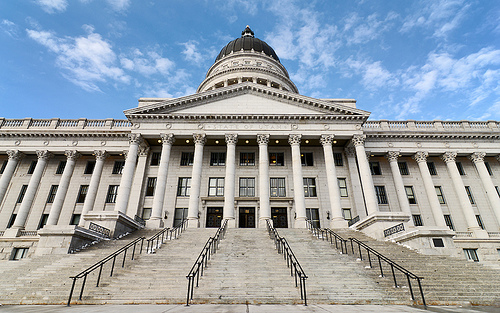 Most Utahns favor a citizen initiative petition that would require the state to expand Medicaid (health aid for the poor/low-income), a new UtahPolicy.com poll finds.

Pollster Dan Jones & Associates in a new survey has support for fully expanding Medicaid under the Affordable Care Act at 59 percent.

You can read the Utahns Decide Healthcare petition here.

Medicaid expansion has been a battle before the Utah Legislature since 2014.

The Utah Senate passed it several years ago.

But the Republican-controlled House refused to go along.

In time, the House forced its own Medicaid expansion on both the Senate and governor – one that covered far fewer people, but cost the state less.

But over a year passed before the federal government gave Utah its needed waivers – finally coming this past Fall, just in time for many of the homeless to qualify for Medicaid expansion.

And a citizen group started a citizen initiative here in Utah that would require the state to take full advantage of Medicaid expansion.

To pay for the state’s share of the larger program (something conservative GOP state House members refused to go along with), the initiative would raise the state sales tax from 4.7 percent to 4.85 percent – or a 3.1 percent increase.

Here are some of Jones’ numbers:

Mormons are instructed to be charitable to the poor and needy.

All other religious breakdowns in the survey support the initiative by greater majorities than that.

And those who said they have no religion support the petition, 76-22 percent.