Salt Lake City: An island of liberal blue in a sea of conservative red 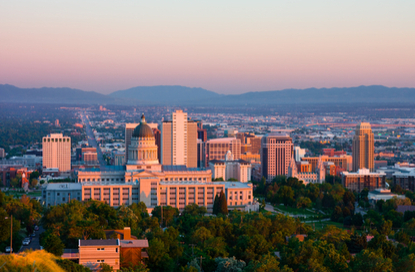 It is a tale of two worlds.

The people of Salt Lake City compared to Utahns as a whole.

Religious affiliation, partisan politics, education levels – all are much different statewide than they are in Utah’s capitol city.

A comparison between the demographics found in a recent UtahPolicy.com poll of all the state by Dan Jones & Associates, and a survey of Salt Lake City residents, find significant differences.

The city really is a different world than most of the rest of the state – although there are liberal enclaves in Park City, Moab, Torrey, and Springdale, among other areas.

Active Mormons reign throughout Utah, both socially and politically.

But not in Salt Lake City, where active members of the LDS Church are a significant minority.

Utah is a red state – Republicans hold all the major statewide offices and all of our D.C. delegation. The state Legislature is more than two-thirds Republican.

But the city is definitely blue – Democratic.

Much of this we already know by the feel and look of city residents compared to other places, like Provo.

But Jones’ numbers are still illustrative, if not astounding:

That’s one reason why the Salt Lake City mayorship – while officially nonpartisan – has been held by Democrats since the mid-1970s.

Salt Lake City is the international headquarters of The Church of Jesus Christ of Latter-day Saints.

But active Mormons – who pay tithing and hold temple recommends – have become a definite minority in the city.

You can see why that in the city the LDS Church has been closing down local ward houses over the last 30 years, selling off the land.

Finally, Jones finds that city residents are better educated than Utahns as a whole. (Would anyone dare say smarter?)

The city, of course, contains the University of Utah – the state’s largest public institution of higher learning.

Here are some other number breakouts to consider in the above analysis:

There are about 3.102 million people in Utah, one of the nation’s fastest-growing states.

That, of course, includes Salt Lake City. The city itself is also growing in population, now at about 193,700.